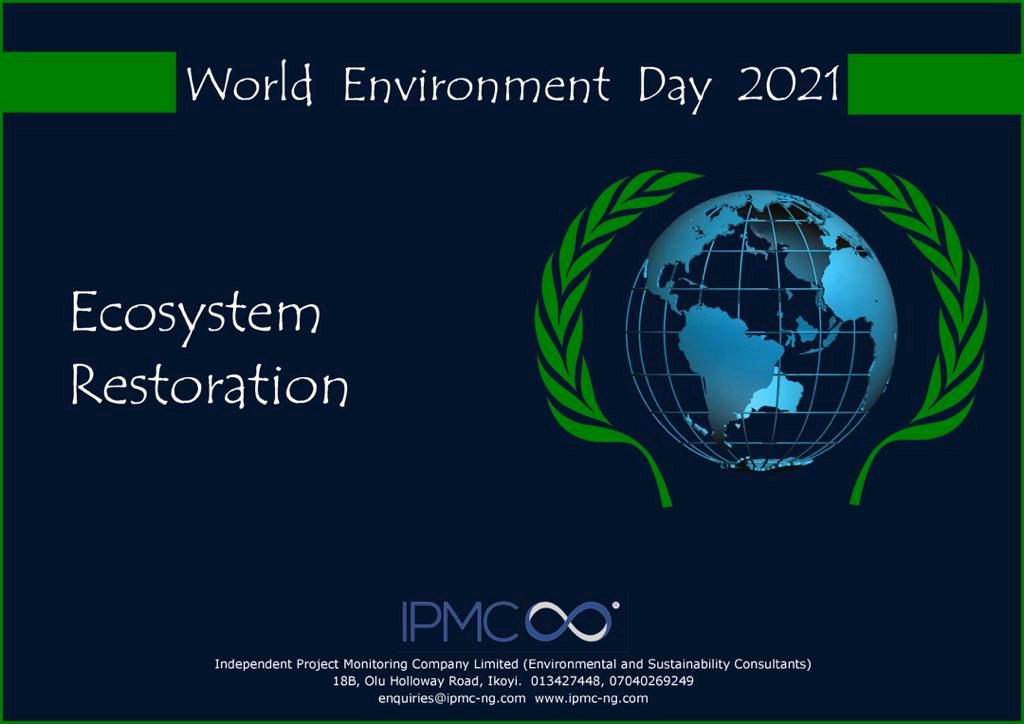 The United Nations has for several years designated June 5 as World Environment Day to highlight that the protection and health of the environment is a critical issue, which affects the well-being of people and economic development globally. The celebration of this day has provided humanity with an opportunity to extend the basis for an enlightened opinion and responsible conduct by individuals, private businesses, communities and governments in preserving and enhancing the environment

This year’s observance of World Environment Day will be on the theme of ‘Ecosystem Restoration’ and a slogan ‘Act Now, Restore Nature and Livelihoods’. The theme focuses on resetting our relation with nature. It will also mark the formal launch of the UN Decade on Ecosystem Restoration 2021 – 2030. World Environment Day is the United Nations’ flagship day for promoting worldwide awareness and action for the environment. In the previous years, it has become to be the largest global platform for environmental public outreach and is celebrated by millions of people globally.

The UN Decade is intended to massively scale up the restoration of degraded and destroyed ecosystems to fight the climate crisis, prevent the loss of a million species and enhance food security water supply and livelihoods. The UN Decade runs from 2021 through 2030, which is also the deadline for the Sustainable Development Goals and the timeline scientists have identified critical for avoiding the worst impacts of climate change.

”When you have seen one contractor perform this good, you are encouraged to patronize more local contractors.”

Ecosystem loss is depriving the world of carbon sinks such as forests and peatlands at a time we can least afford it: Global greenhouse gas emissions have risen for three consecutive years. The emergence of COVID-19 has demonstrated how calamitous the consequences of ecosystem loss can be. So, it is timely for this year’s World Environment Day to coincide with the launch of the UN Decade on Ecosystem Restoration, a global mission running through 2030 to protect and revive billions of hectares of valuable and much needed natural capital, from forests and farmland to the oceans.

Ecosystem restoration means assisting in the recovery of ecosystems that have been polluted, degraded or destroyed, as well as conserving the ecosystems that are still intact. Healthier ecosystems, with richer biodiversity will definitely yield benefits such as more fertile soils, better yields from farming and fishing, and larger sequestion of greenhouse gases.

For instance, Nigeria has extensive mangrove forests in the coastal region of the Niger Delta, which is considered as one of the most ecologically sensitive regions in the world, as the Niger Delta mangrove forest is situated within a deltaic depositional environment, that is subjected to tidal influences. Mangroves, particularly in Nigeria are very vital as they serve as shoreline protection against floods and storms, prevent erosion, store carbon several times more than traditional rainforests, and they are also very tolerant to brackish or salt water. More importantly, they provide several economic benefits to inhabitants of the area where the mangroves are found.

Most ecosystems can be restored, including mangroves, rainforests, farmlands, wetlands and oceans, while others such as coral reef barriers are difficult to restore. Restoration can occur in various ways, such as actively planting or by removing pressures so that nature can recover on its own.

There are valid reasons for ecosystem restoration, such as maintaining and rebalancing a diverse and functioning ecosystem services. In order to achieve achieve restoration at the required level or to restore to baseline conditions, non-financial incentives and financial investments should be committed in changing the way lands and oceans are exploited by individuals, private entities and governments, worldwide.